Once again the weather was well trained, and our departure day from Riglos had rain scheduled. It bucketed down, but seemed to have lighter skies to our north, making me wonder about "the rain in Spain..".

Our original "fourth stop" was to the crag of Vilanova de Meiŕ, promising some of the best 3-4 pitch routes on limestone in Spain. However after the long epics of Riglos we weren't sure about tying ourselves to a south-facing cliff with full sun all day. Additionally, Vilanova de Meiŕ the town seemed to be a similar size to Riglos, with not much to do. After some research a couple of days before we relocated, we booked the swisher (but still reasonably priced) "Hotel Terradets", by the lake near the Terradets gorge.

It was the right call.

After driving through torrential rain we pulled in to the town of Camarasa for lunch. The clouds lifted a little and we suddenly had views of acres of steep limestone. The roadside bar at Camarasa seemed deserted and only offered bar snacks despite some good online reviews - really is this it? After making it clear we were there for lunch, we were led 'out the back' through an unmarked door to a large and fully-set dining room that we'd never have known was there. A terrific multi-course lunch including a bottle of wine and coffees was had for €22 - about $33 - for two of us.

After continuing to Hotel Terradets, checking in and doing some research, we decided again we didn't have enough crag info and bought one more guidebook "Lleida Climbs" that gave us more detailed coverage of the local area.

The next day we opted for another 'rest' day, and drove up over the hills to the Congost de Montrebei (Montrebei Gorge) which offered a spectacular day walk through the gorge. In the end we did about 14km, hardly a rest day, but very enjoyable. 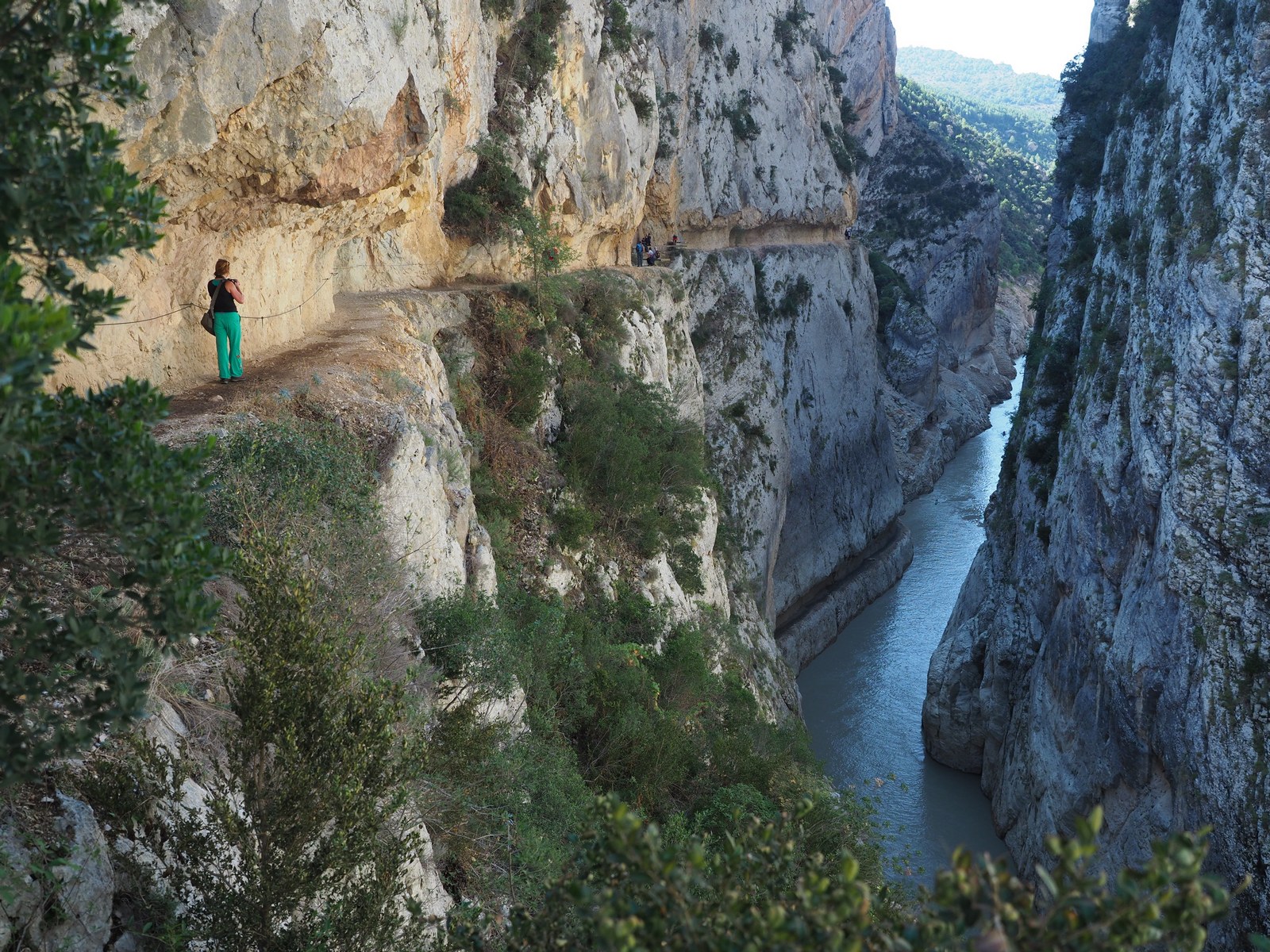 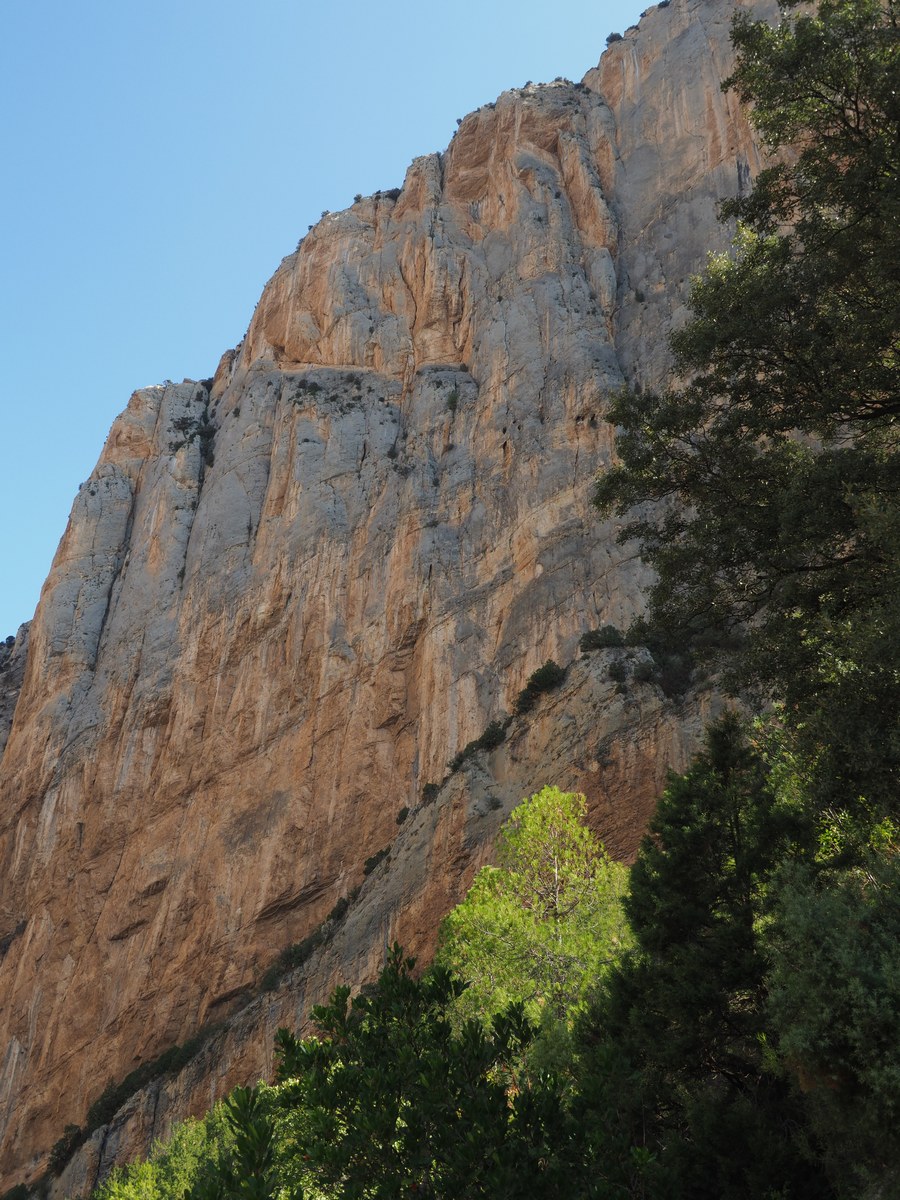 P9236727 The side of the gorge. Climbers are visible on a multipitch adventure above us, see zoomed photo below: 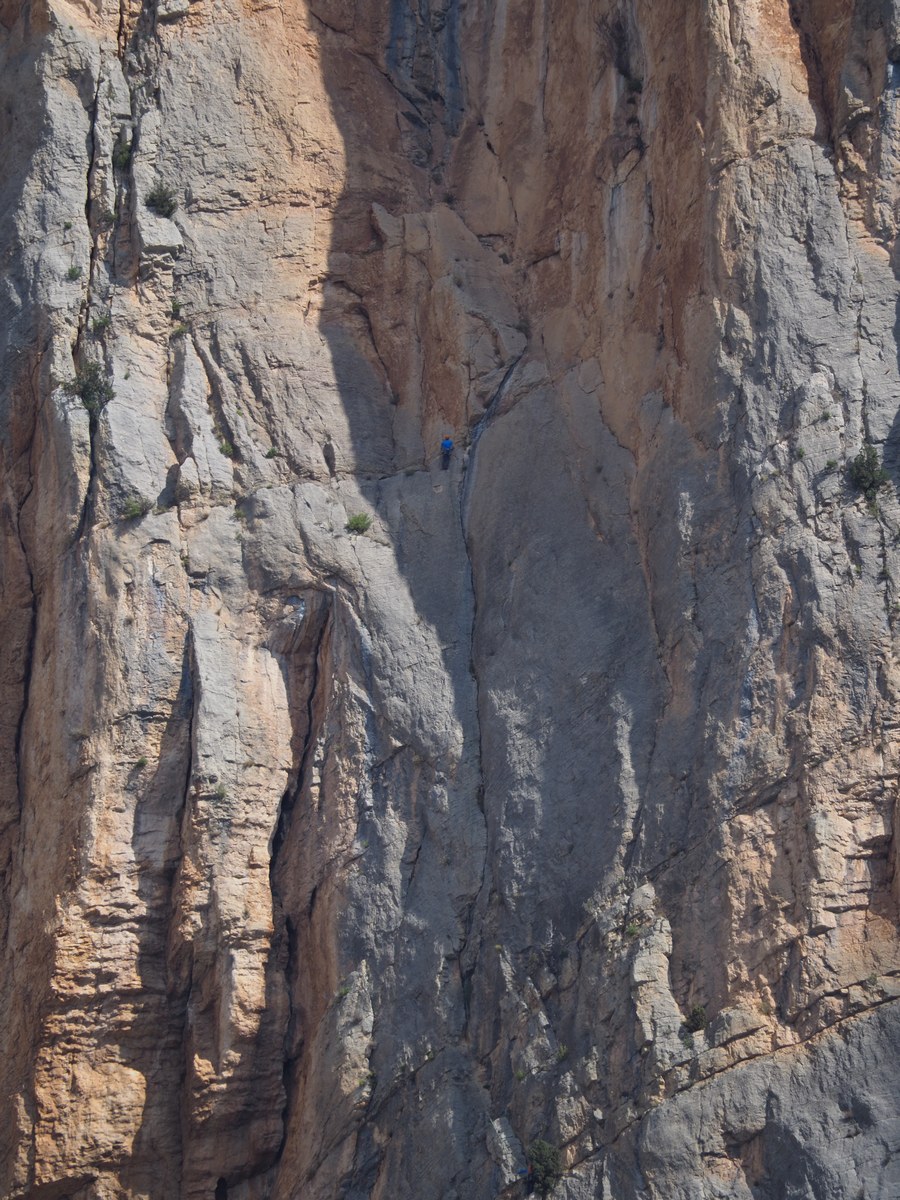 If you want to see some more about climbing in Montrebei, Mr Sharma can show you much more than I can here. Worth watching, all the way to episode 3. (Who’s that Simon guy?)

We stopped at a winery on the way back, located on the other side of the lake. It turned out to be "by appointment only", but we had the good fortune to pull in immediately behind a group of Spanish holidayers. One minute later and the gate would have been shut and we'd have missed out. The winery tour was in Spanish only (and overpriced), but a couple of the women helped out by translating into French for me and then I could translate into English for Paula. Clunky but the language of wine is fairly universal anyway.

The best option for single pitch sport routes seemed to be back at Camarasa, so the next morning we made the 25-minute drive back south through the gorge. 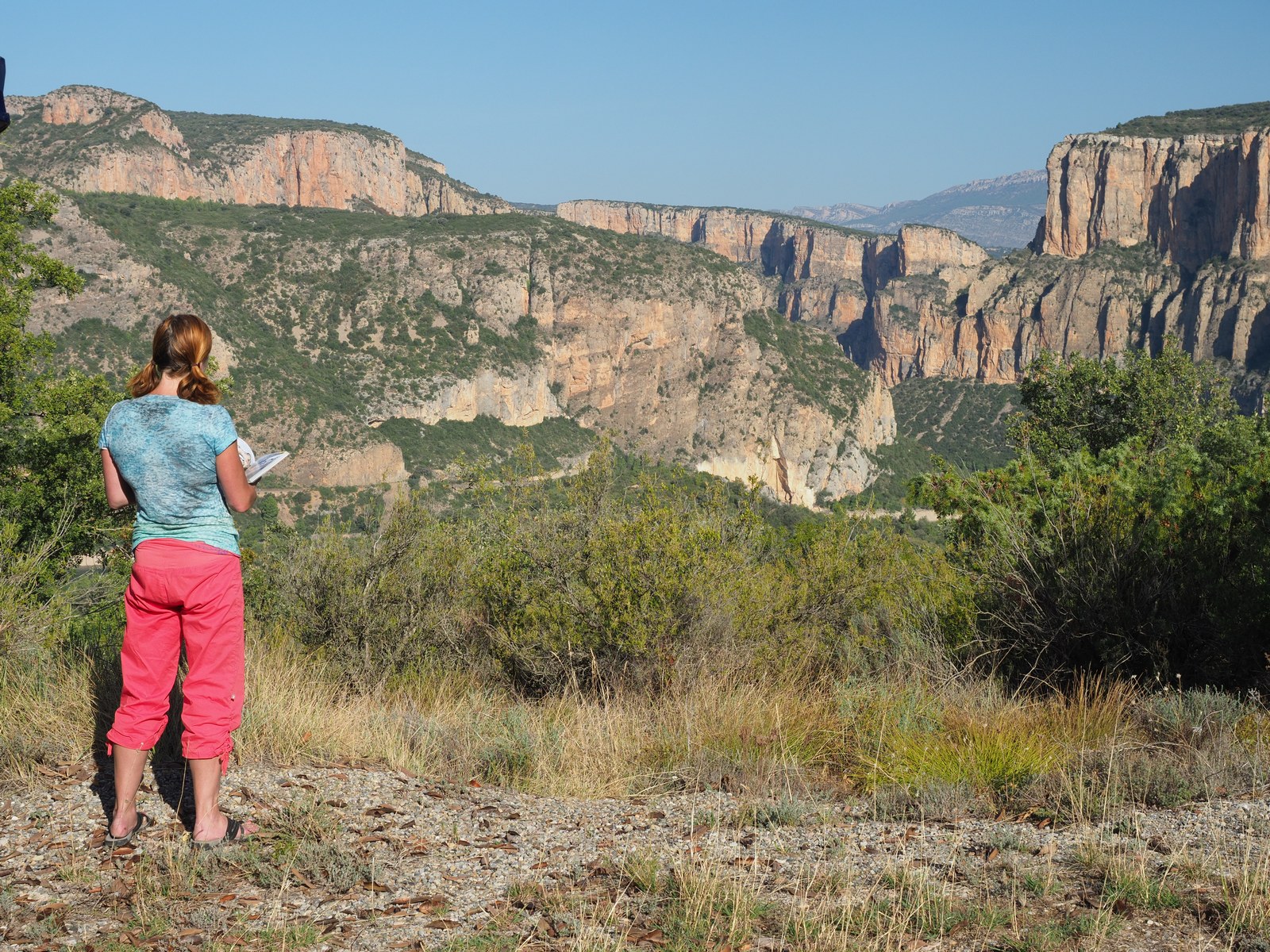 P9246774 Paula attempting some crag-spotting on the way to Camarasa

The broader area here, known as Serra del Montsec, contains so many cliffs it's hard to count them. The drive through reminded me of the Blue Mountains, with winding roads providing views of distant cliffs, and a hydro station to boot. We pulled in to the area "Marcant Estil" which was deserted. On a sunny Sunday. We'd been promised a 1-minute walk-in, but there was a spot to pull off the road with the crag right there and the river on the other side of the road. Beautiful, if you could ignore the occasional howls of the motorcyclists on the bends and tunnels of the road above. 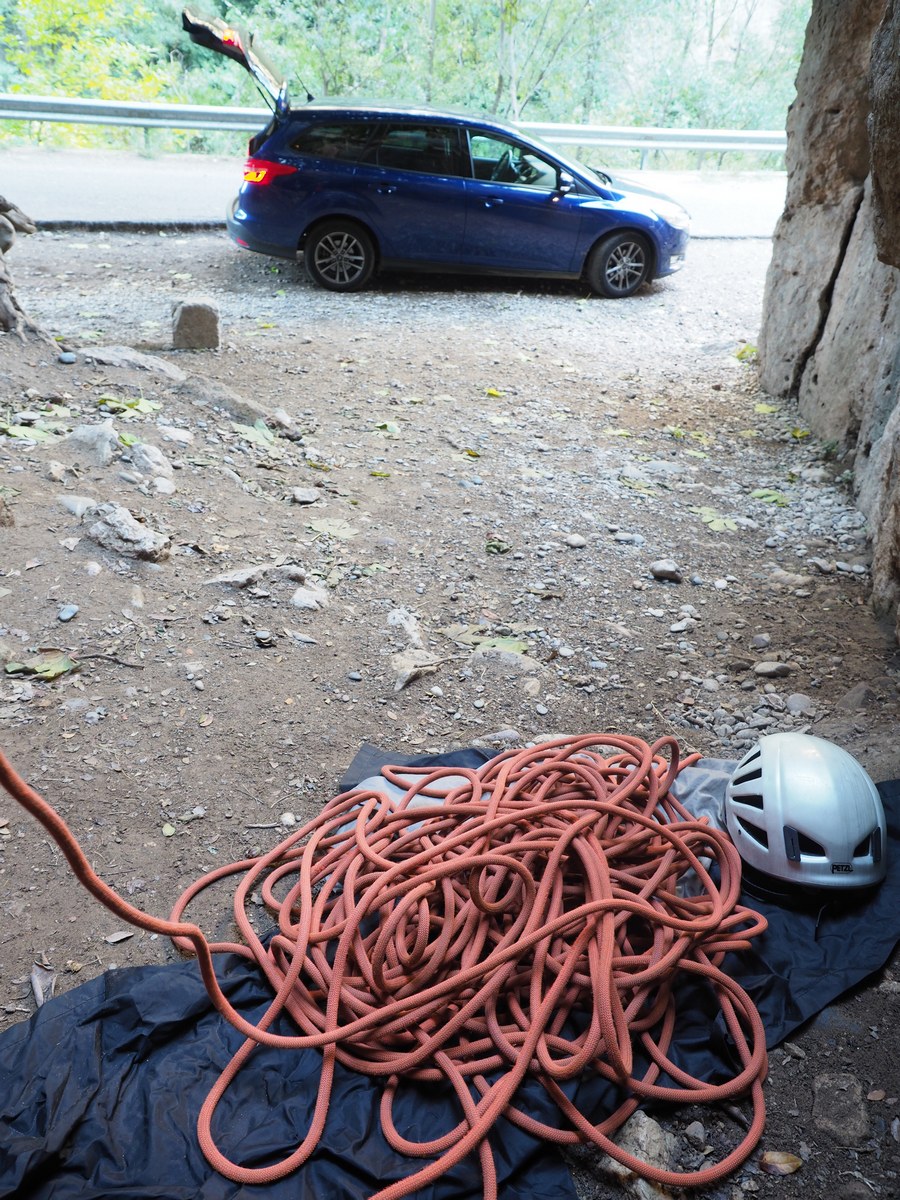 We picked a little alcove with a nice little 5+ (17) to start on. The rock was again polished due to traffic, and suddenly you find your footwork all turns to crap as you have trouble trusting your feet and even 17's feel tricky. This was the pattern throughout our trip to some extent - it took 2-3 days to get used to the rock, and by day 4 you were starting to feel more comfortable and climbing better. Then it was time to go somewhere else.

The 6a "Miss Linda" was worse - nice holds on steep moves up to a high bolt, harder moves to the 2nd and 3rd, then I thought I was home free with the anchors just above me. But the last 3m was a polished slippery groove, requiring tricky stemming that I slid off a couple of times before getting it. Sandbagged again! 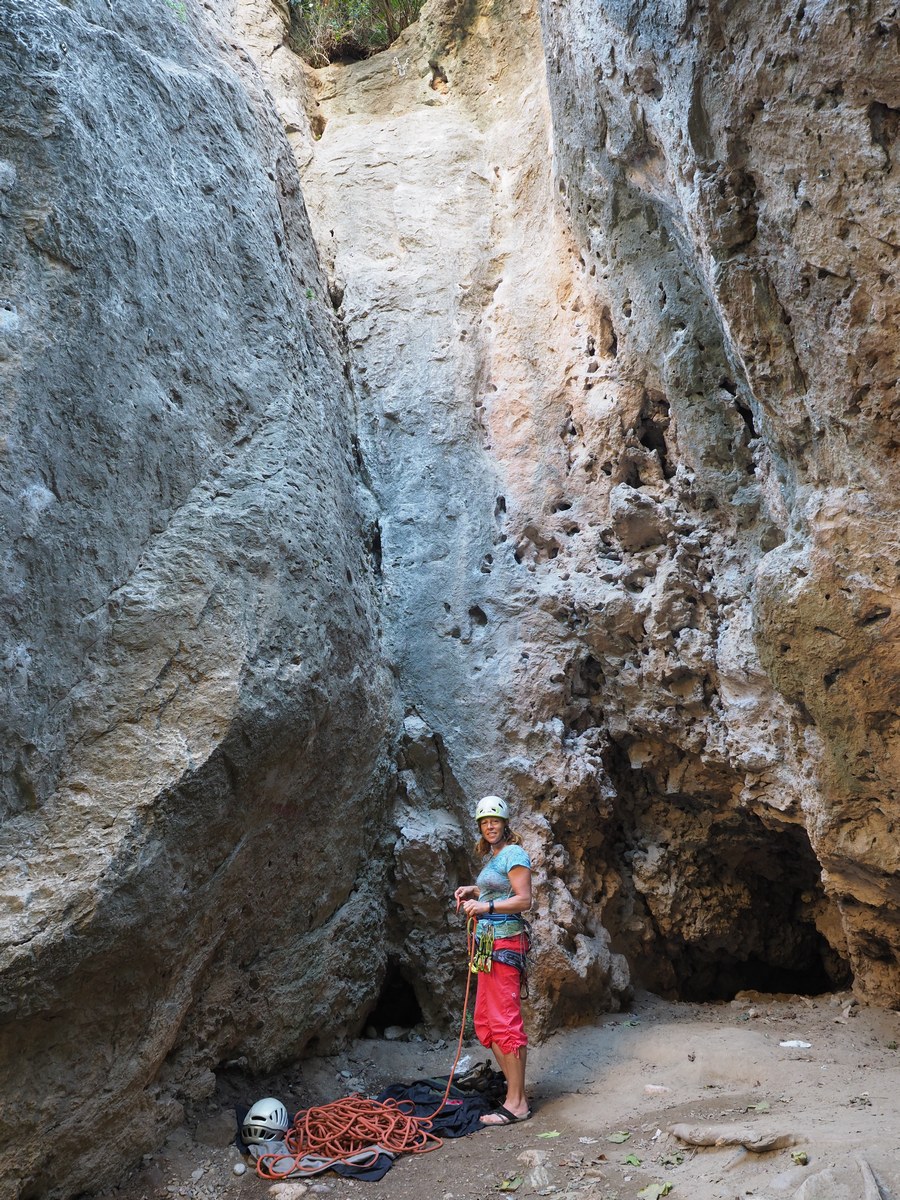 Paula leapt on, showing a bit more confidence and looking like she was going to flash it, before also sketching off the crux and taking a fall.

By this time a few other cars had arrived and a party of 3 decamped next to us. They were from Manchester, UK, on a short climbing holiday, and had briefly been in the Grampians last year. It was nice to be able to strike up a conversation for a change. (They also got tossed off Miss Linda, until Ben with some superior reach managed to get to the jugs without so much stemming). 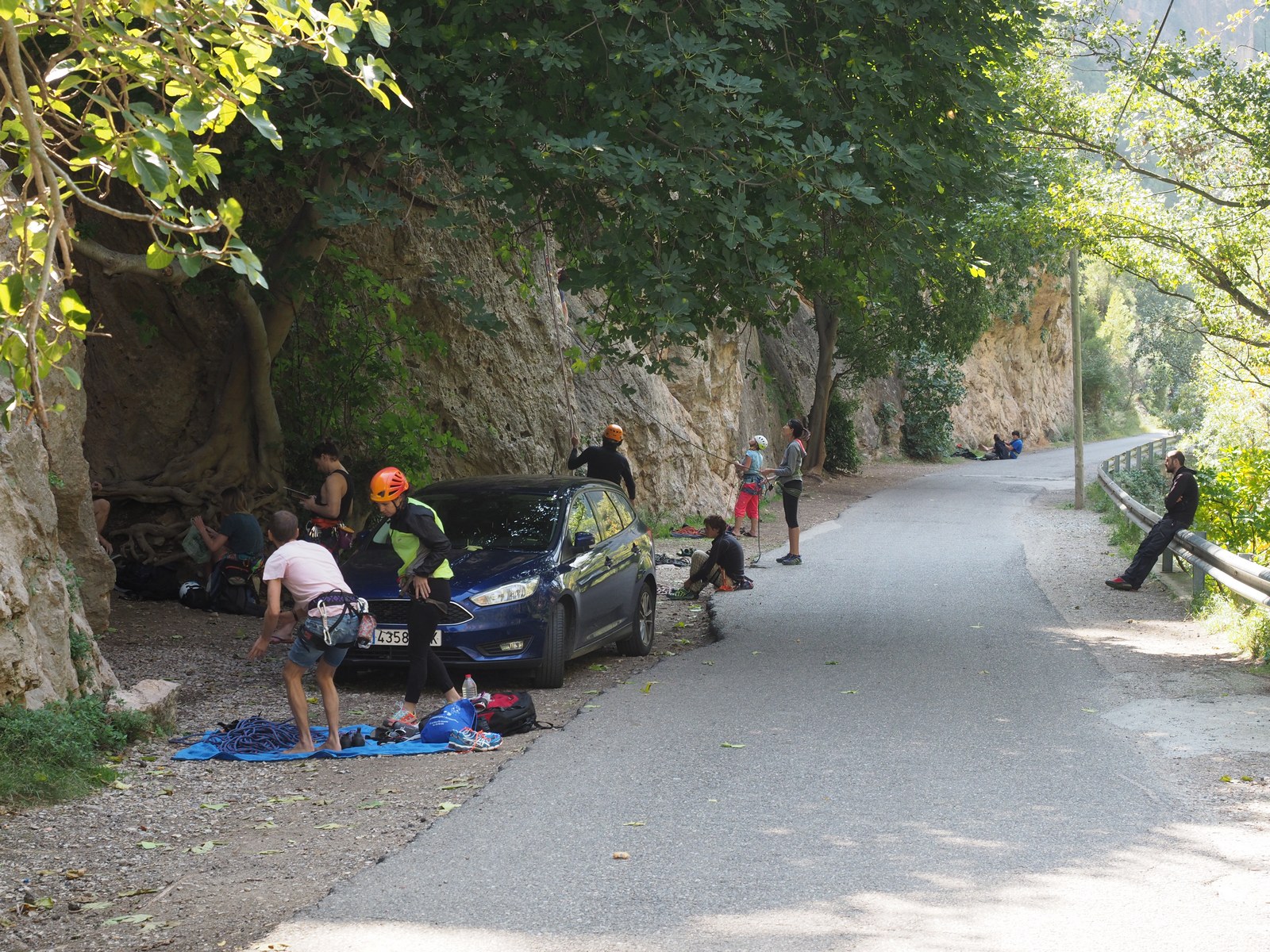 We picked on several other routes, with Paula leading "Los Guti" (6a), then toproped a steep 6b "Espitbul" from the common anchors, and generally had an enjoyable time. Paula finished the day on a high note with an onsight of another sustained and tricky 6a (18-19). 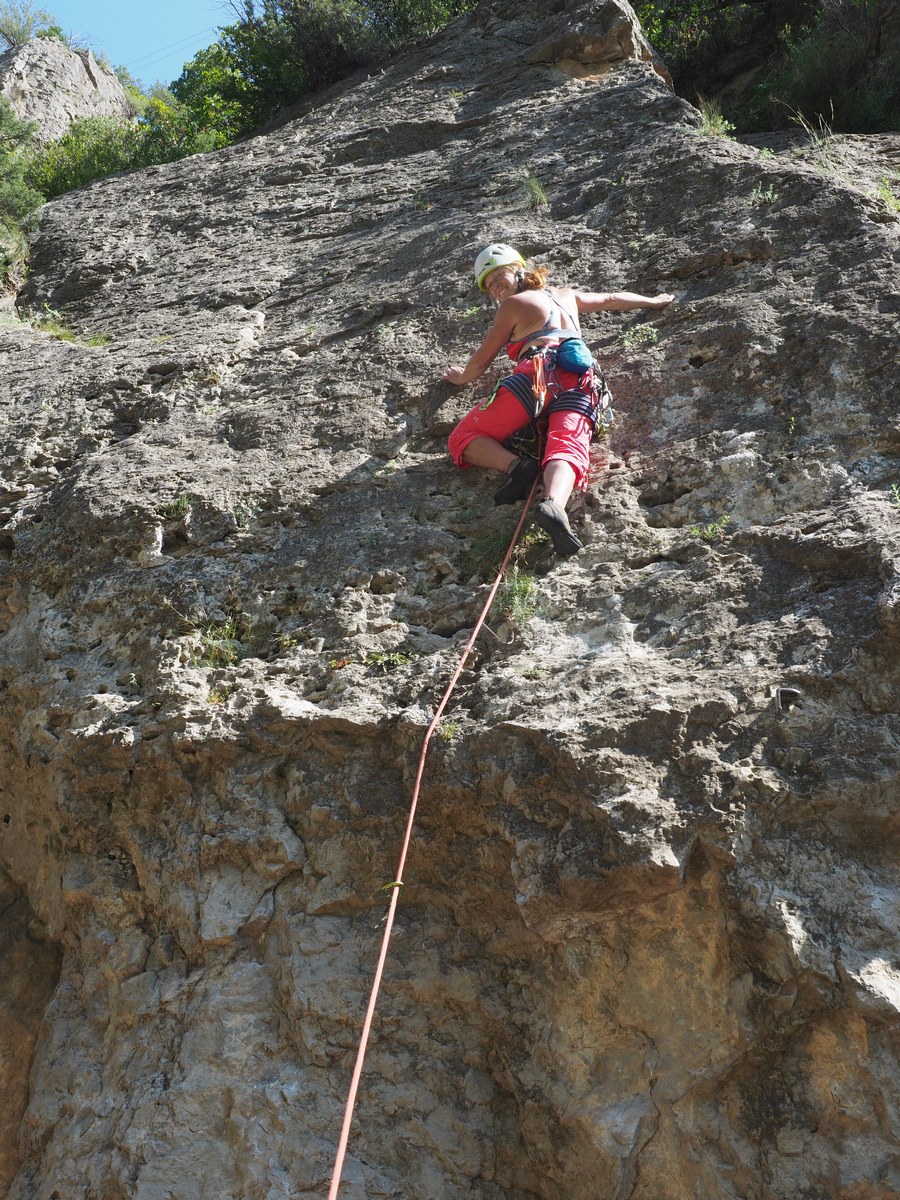 Day 3 we needed to check out from the hotel and head back to Barcelona. Multi-pitching was contemplated, as we had some recommendations for 4-pitch routes in the local Gorge, but they were in full sun and we were concerned about leaving all our luggage in the car. So we came back to the original plan and drove over the hills to Vilanova de Meiŕ, where the extra info in the new guide showed a number of good single-pitch routes with a 5-minute walk in. 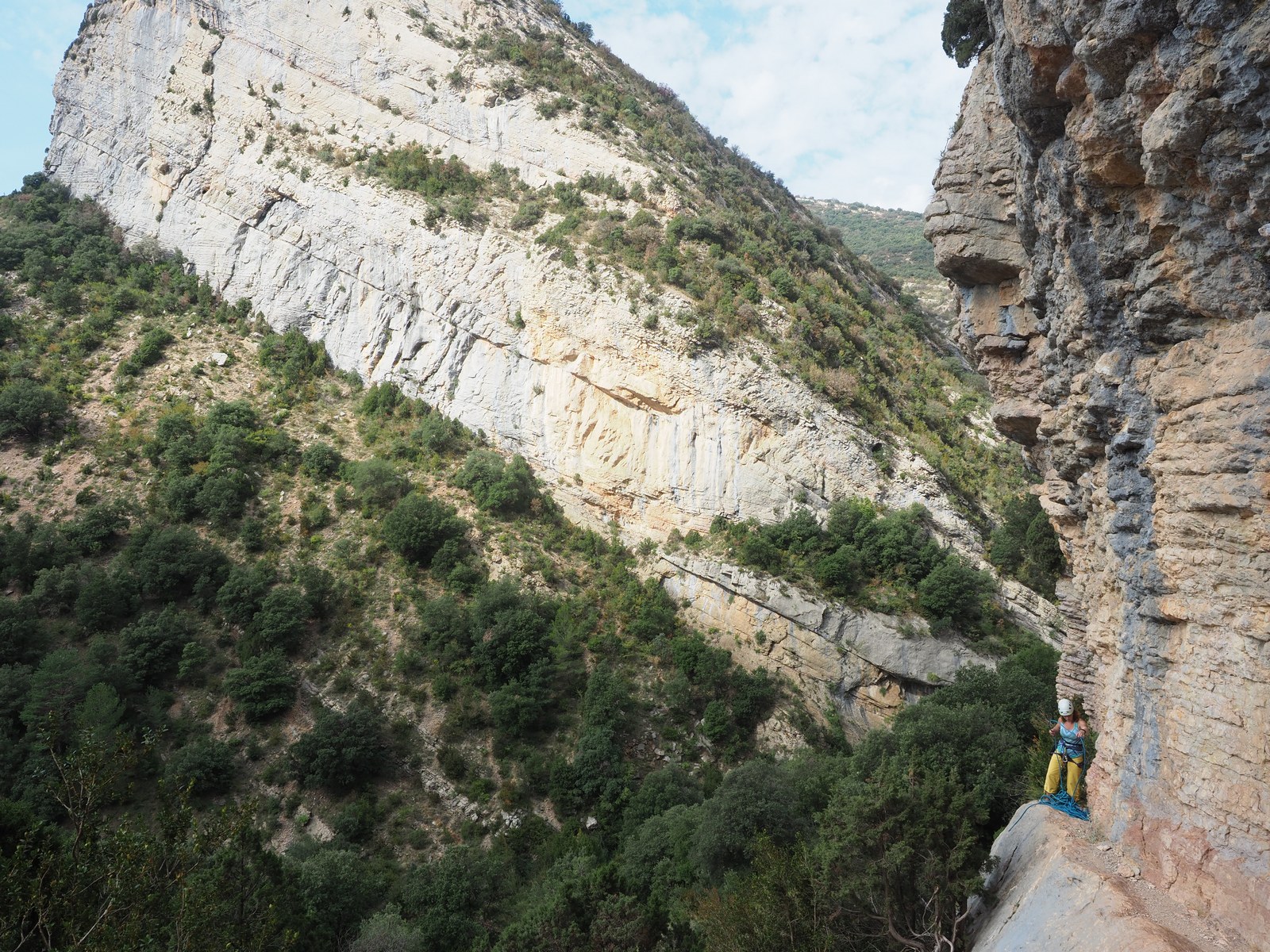 Flaking the rope on the ledge at Vilanova de Meiŕ

It was as promised, with the first sector having a number of steep routes on very good rock and well bolted. A narrow access ledge ran left to access the routes, and you wouldn't want to fall off it, so Paula made a makeshift belay by tying off a bush. Both routes were great - there was one sandbag, a 6a with a hard pull around a bulge on a crimp that I thought was more like 21 (6b+). The other grades of the routes there were about right though, making me wonder if it was an editing error or a hold had broken. 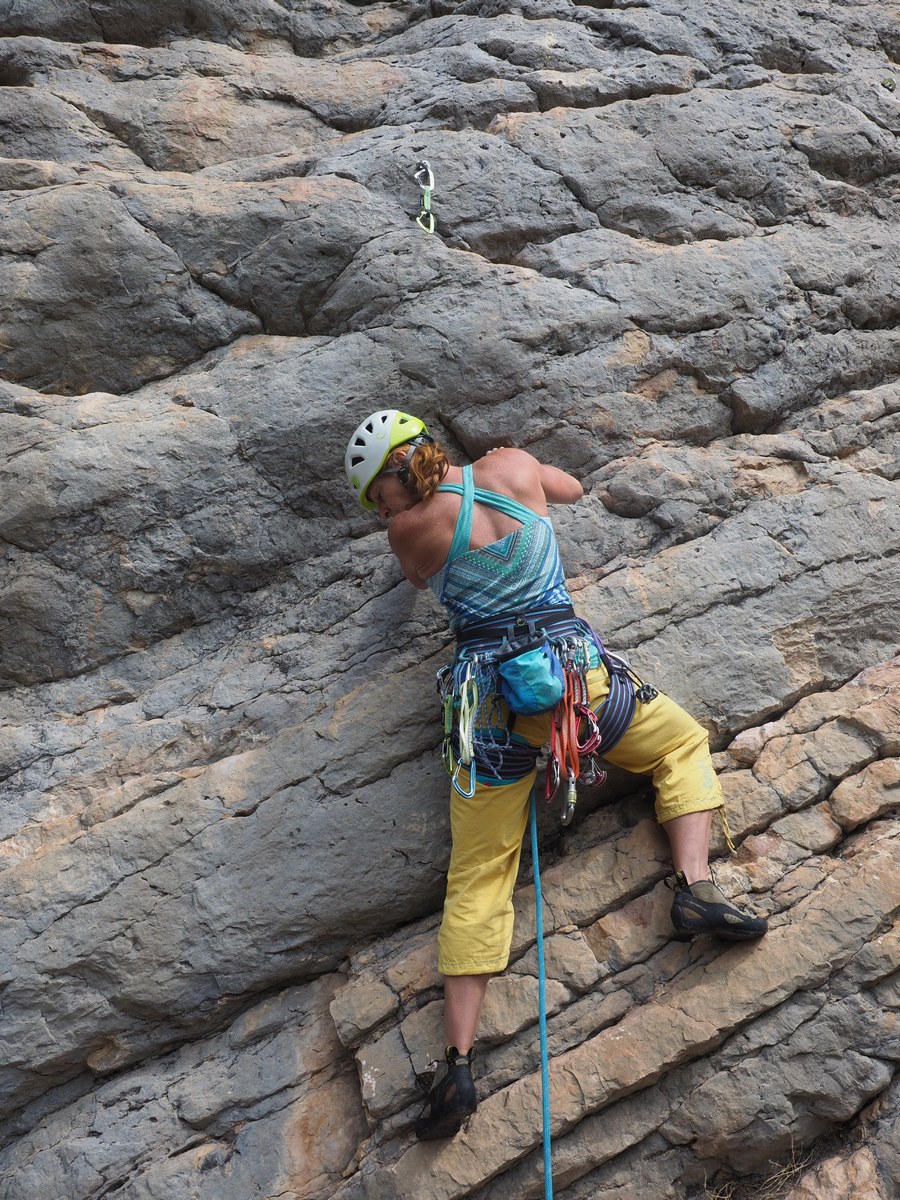 After two routes we headed further up the hill for another couple then packed up and headed down the valley for lunch and the drive back to Barcelona.

The panoramic view of the Villanova de Meiŕ gorge. Multipitch routes on the main band on the left, we climbed single pitches on the grey wall just right of centre.

So apart from some more shopping and sightseeing in Barcelona, that was it.

Previous Back to start