A major objective of the trip was coming much later, but was probably in the too-hard-basket. More about that later.

A secondary objective was the amazing spire of Cavall Bernat, via the Punsola-Reniu route. 7 pitches up to grade 22, it was "do-able" but still challenging.

After relocating to the valley on Sunday, we had an excellent view of our objective.

Montserrat from the north, morning light. Cavall Bernat is the spire just right of centre.

We were up early in the morning, but more for photos than for an alpine start - hotel breakfasts are typically 9am in Spain. We drove up and parked, and left the car just after 10am.

The Punsola-Reniu is one of the classic routes in Catalonia. We congratulated ourselves that we'd scheduled our attempt for a fine Monday when all the Catalans would be working instead of climbing, only to find out the day before that it was Catalonia's state holiday. And perfect weather scheduled. Oops.

The thought that most climbers in the area would want to climb one of the state's icons on their patriotic day did cross our minds, but after the 45-minute approach we arrived at the start ledge to find only one pair ahead of us, a svelte Spanish female and her 57-year-old uncle, who she was dragging up the spire as a special request. Apparently it had been on his tick list for a long time, but he'd become sick (from some disease she didn't know the English equivalent of) and today was his resurrection. She could lead 7a (23-24) apparently, so was playing rope-gun for the day. Nice niece.

He did, however, have a pair of aluminium-runged etriers on his harness.

Punsola-Reniu climbs the steeper side of the spire in 7 pitches, although there is a grade III approach pitch that - despite Paula's disdain for such activities - we soloed in approach shoes. Without really realising.

The 'true' 7 pitches gradually get steeper and harder, culminating in a grade 22 pitch near the top. It was going to be a challenge, but we were assured via the reliable source of the Internet that there were enough bolts to make the way safe and possible. 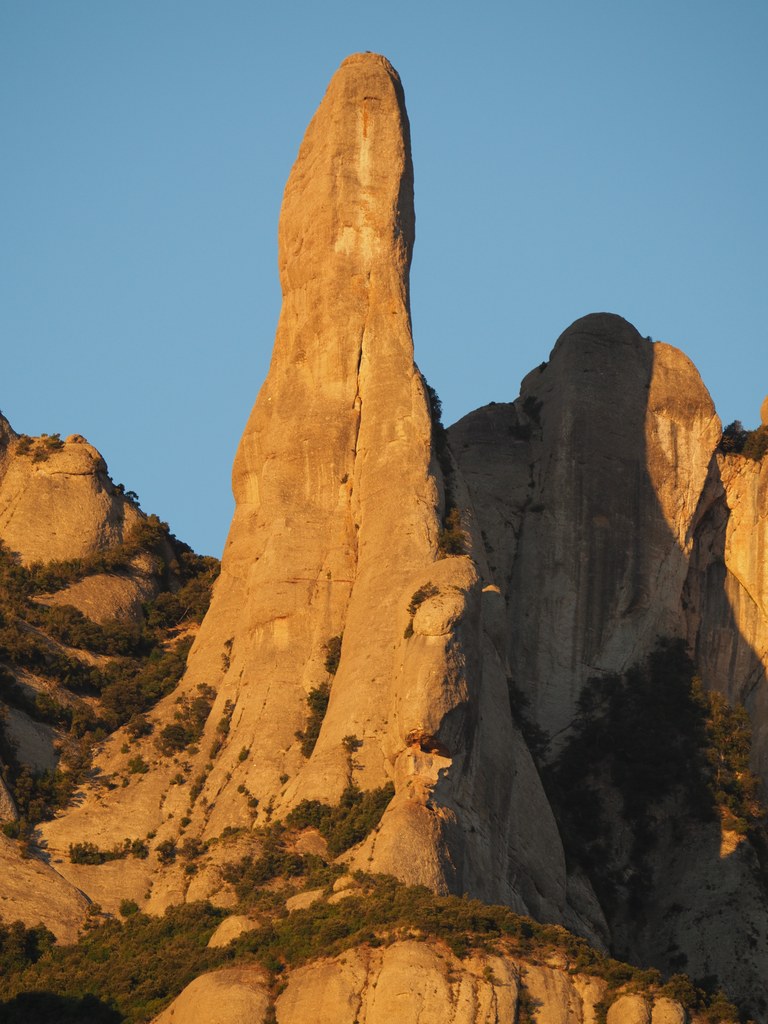 Cavall Bernat from the north. The route takes the face right of the centre crack, then reaches the right arete about half way up, then up the right side and the face. 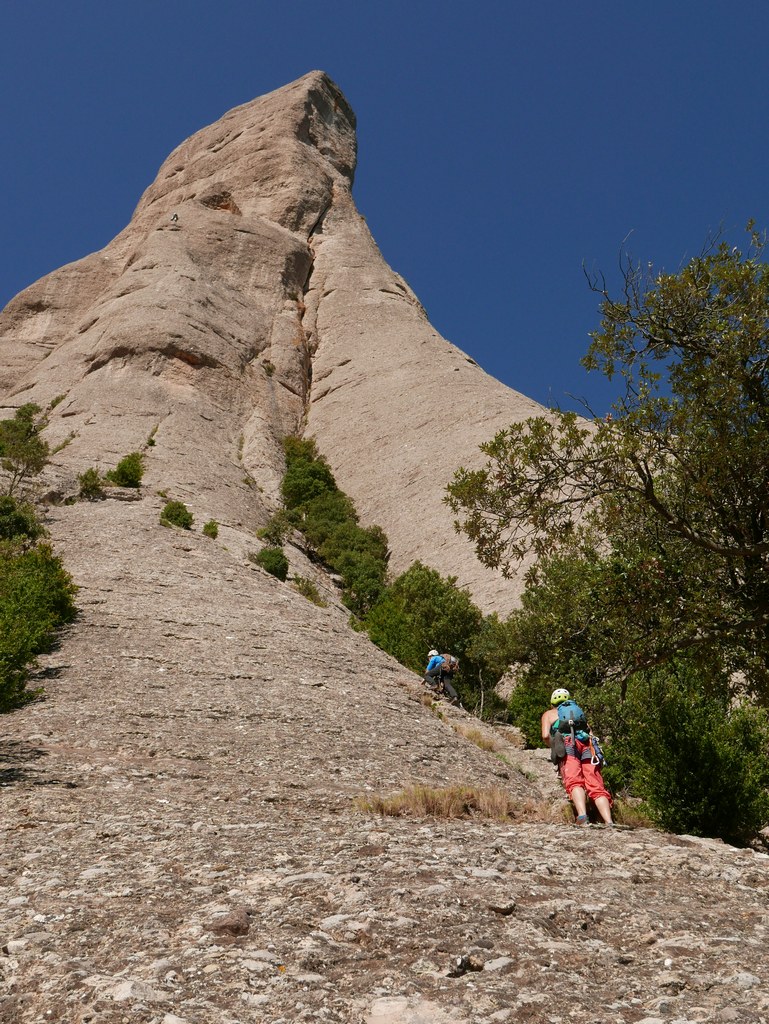 Scrambling up the approach gully. 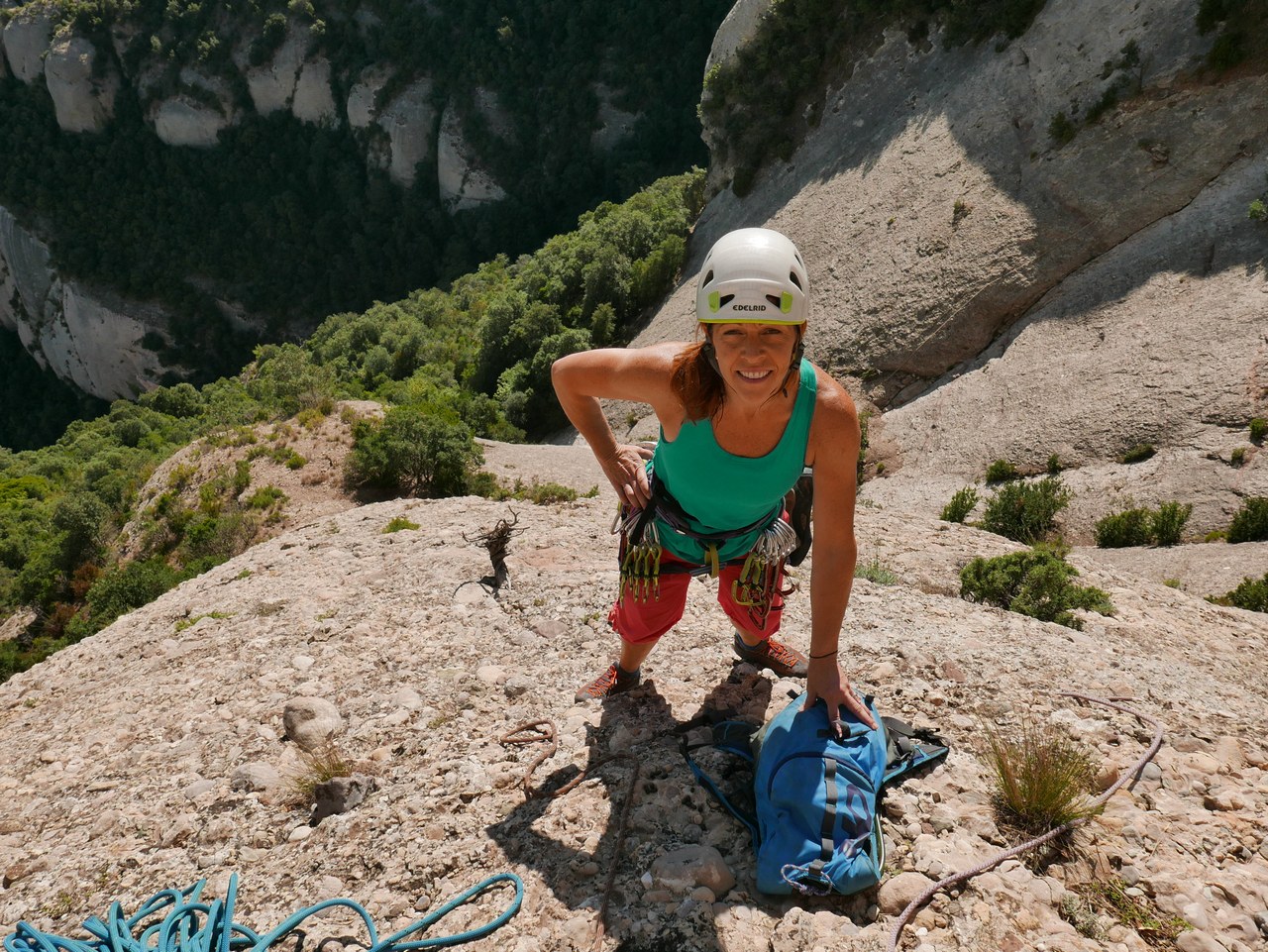 We waited until the Spanish team were well advanced on pitch 2, then Paula led off. 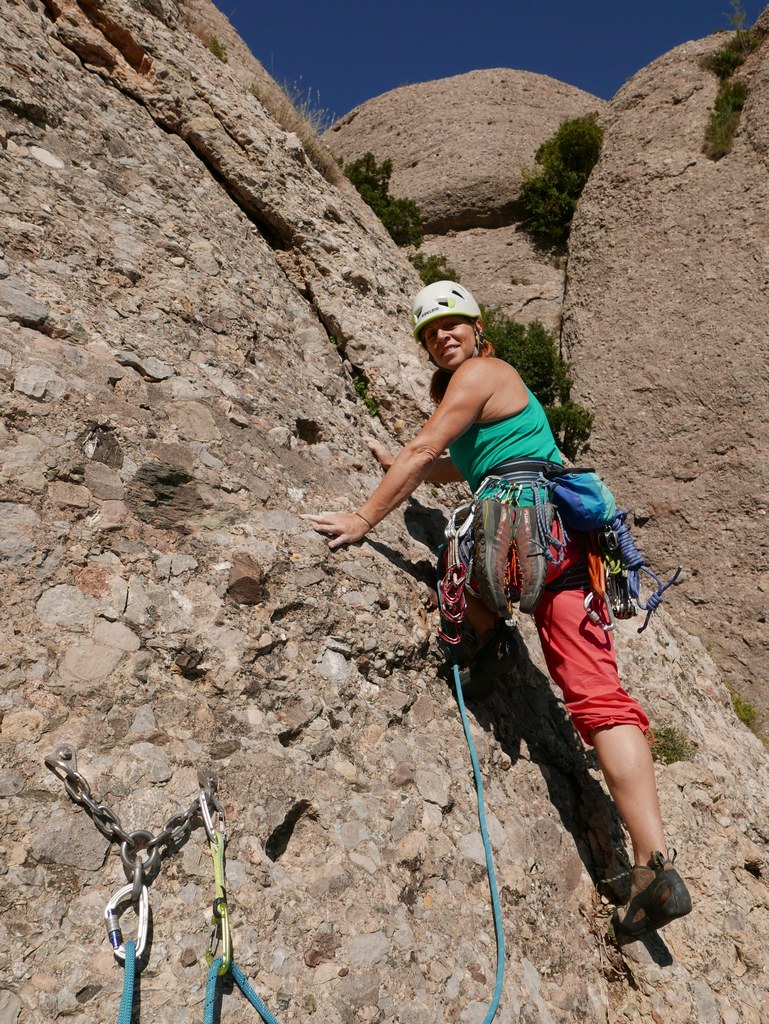 Usually reliable Internet sources claimed pitch one was 50m but with 12 bolts, meaning it was going to be run-out but not too bad. However when Paula clipped bolt 3 there was 27m of rope out, and it looked like the sparse bolting continued to the belays. Only 5 bolts, not 12 as promised. There was a complaint or two but she made it to the belay intact.

I swung leads and found the next pitch slightly harder but much better bolted. One stopper placement along the way was useful.

Paula's next lead became more interesting, about grade 16 up through a roof with one cam placement supplementing 8 bolts to a good ledge. Lunch.

The Spanish team were still about 2 pitches ahead and it seemed the etriers had come into play. At pitch 4 life becomes a bit more serious, with an 18/19 pitch, then 21, 22 and 18 to finish. I led off through pitch 4, finding it thin but OK, and Paula followed suit. 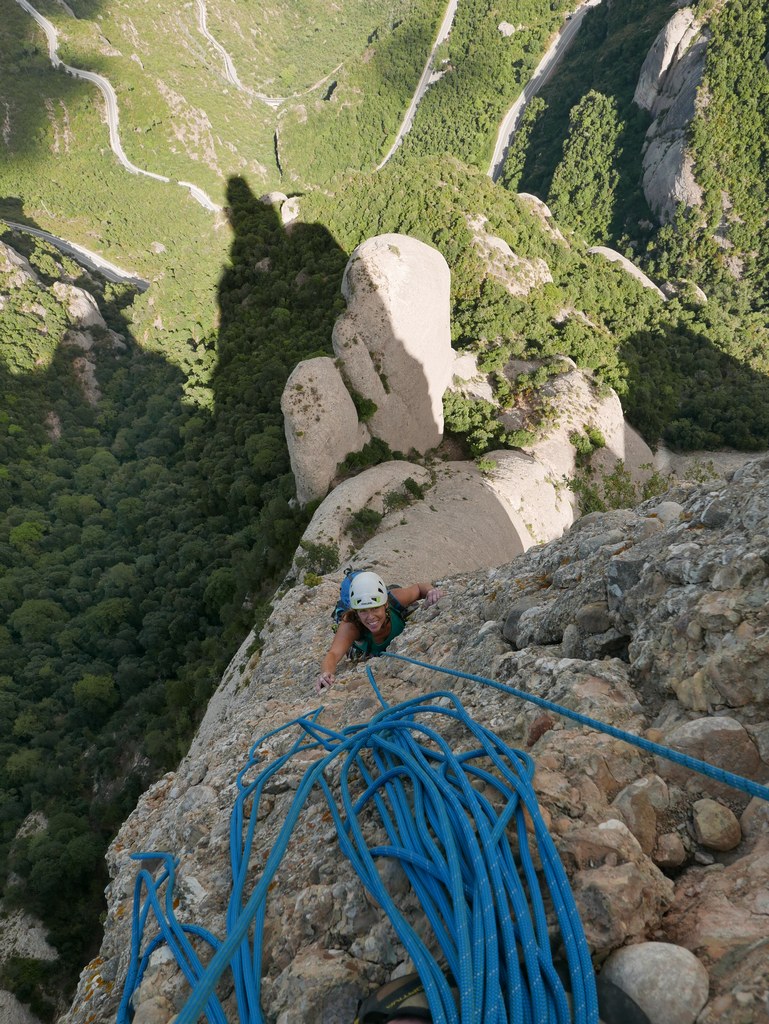 The Google translation of some of the Spanish writeups of the route that I'd found online were hysterical. Pitch 5: Half-thrown, the thing gets crazy and we have to sprint if we want to go free. As we get closer to the meeting, the slaughtered prey will appear again and the difficulty softens. The meeting is suspended.

Given the exposure and our general lack of recent experience climbing 21 or harder, a clean ascent was probably never realistic. However Paula launched up into the long (30m) pitch 5, making her way about to the mid-point before taking a sit and pre-clipping the next bolt. Yes they're that close together. 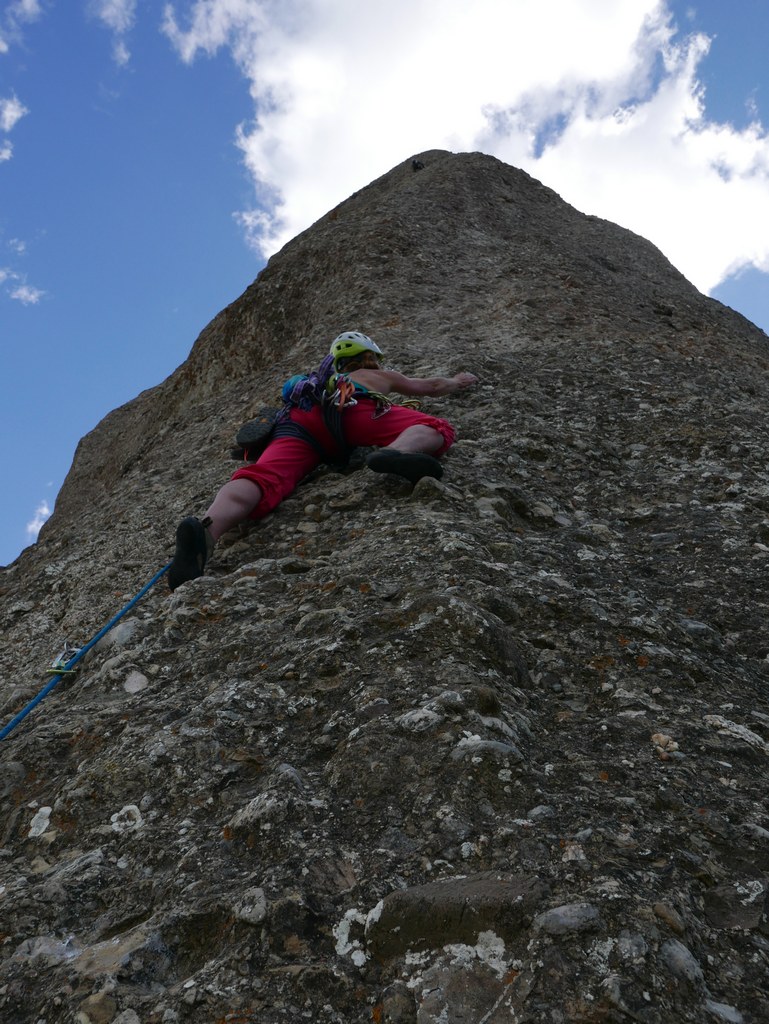 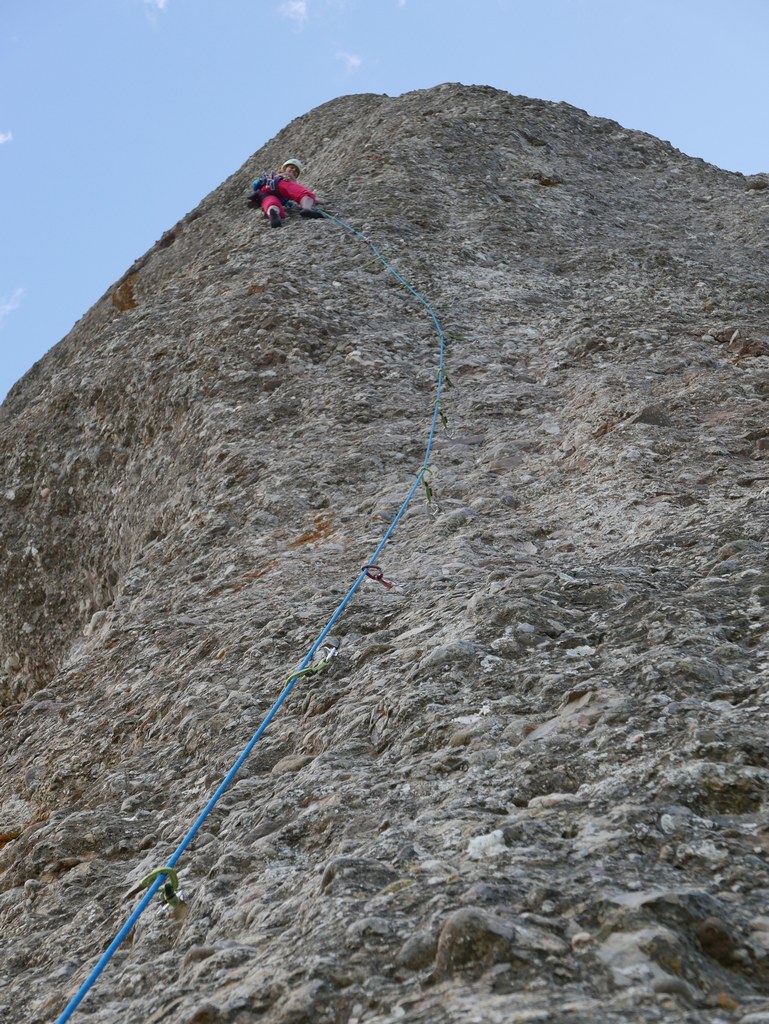 She made it to the belay OK with some rests, but pulling all the moves. I followed in similar style, or maybe another rest or two? Then the crux pitch, shorter but with a hard move in the middle, a long throw up left to a slopey crimp around a bulge that I decided was better attempted with a bolt clipped above my head. 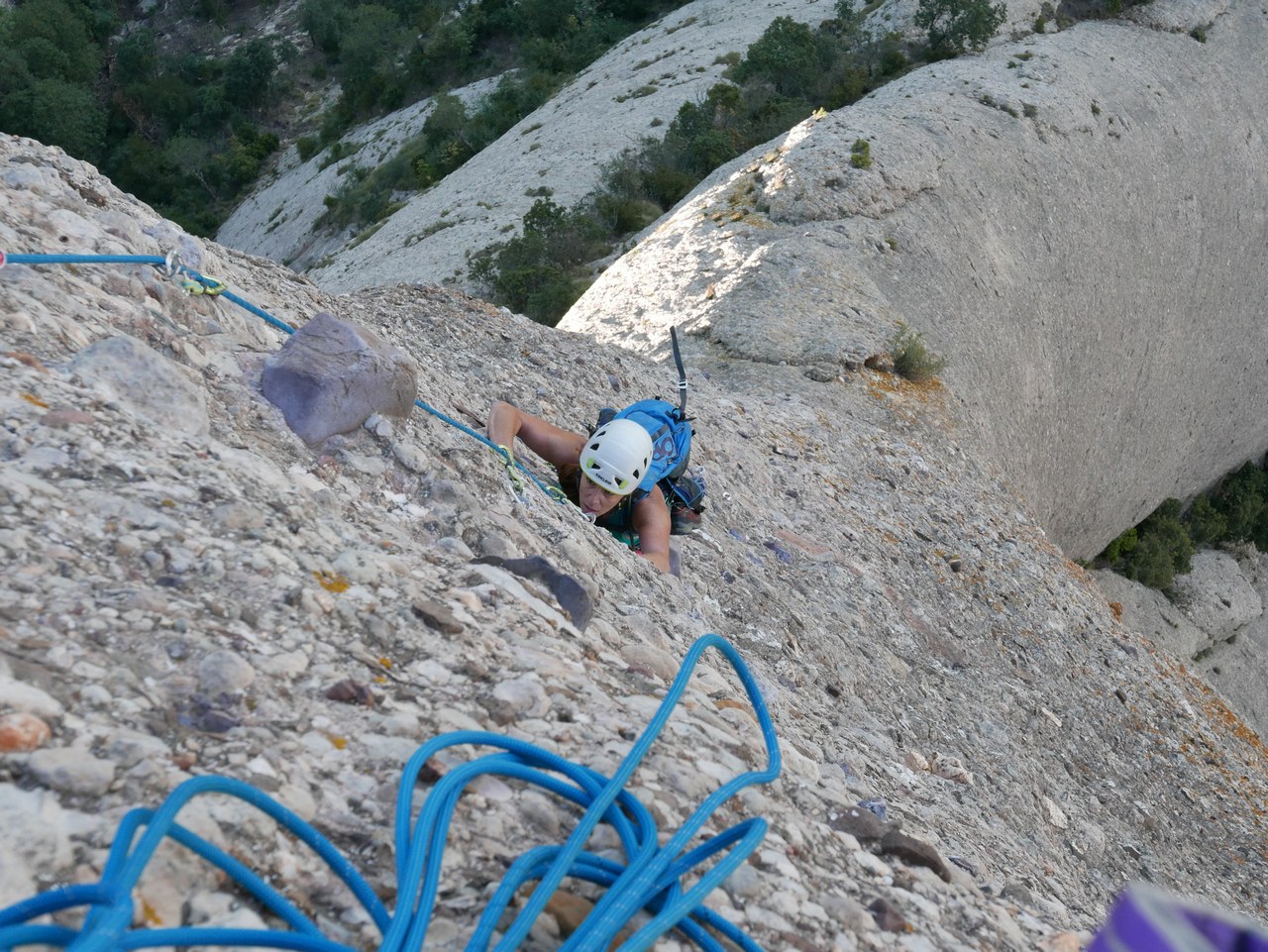 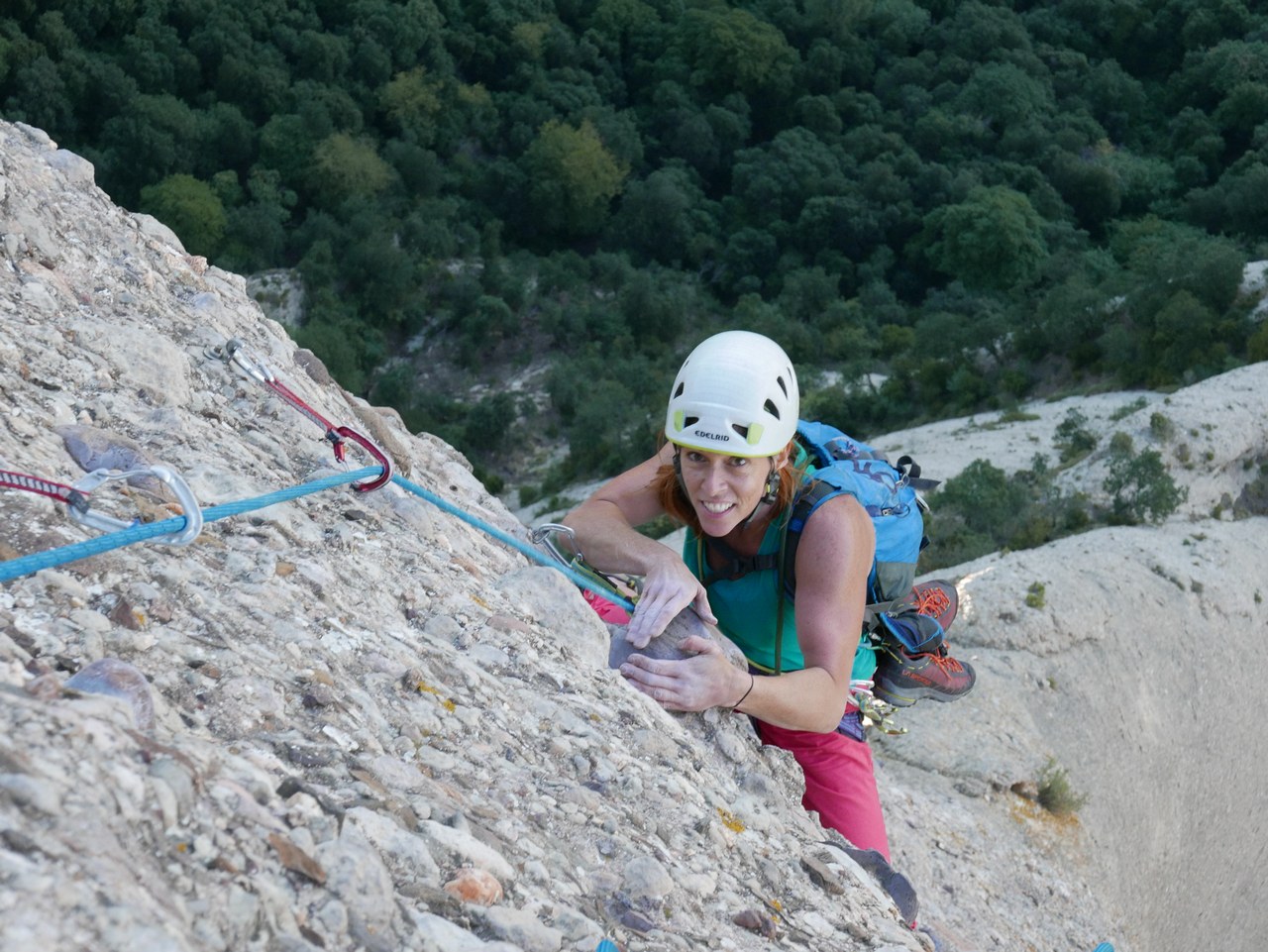 It's not a jug, sorry! Paula at the end of the crux section.>/i> 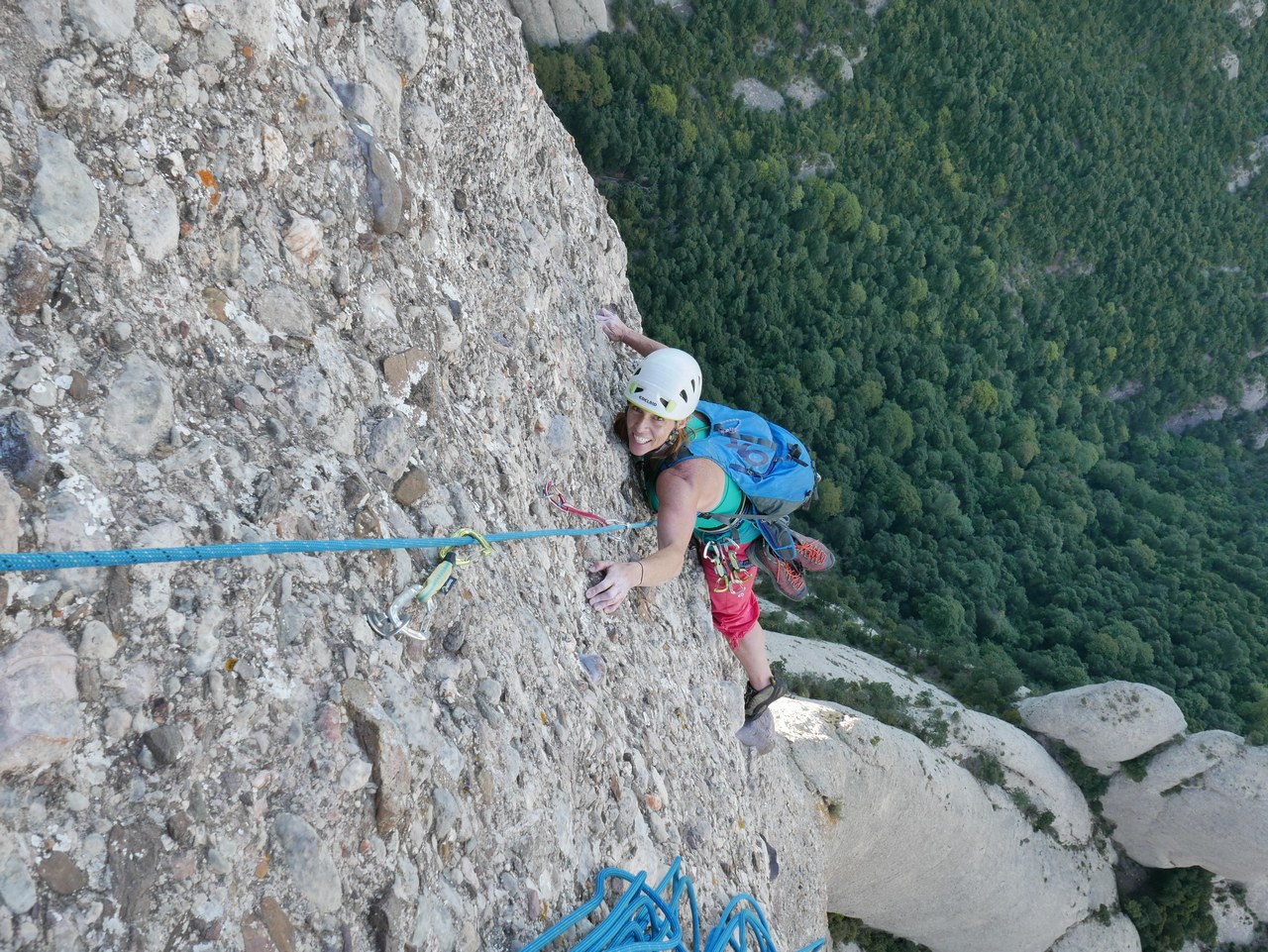 There at the most prime position in the whole area we were perched, hanging off 3 bolts with nothing but 150m of air below our feet, and no other climber in sight. A spectacular position.

We still had the final obstacle of a very exposed traverse right to the arete, then up and around. We were in 'anything goes' mode by then, so Paula pulled on gear to preclip the second bolt then launched upwards, out of sight. Soon the call was heard of "safe" just short of the final summit and we were on top in no time. 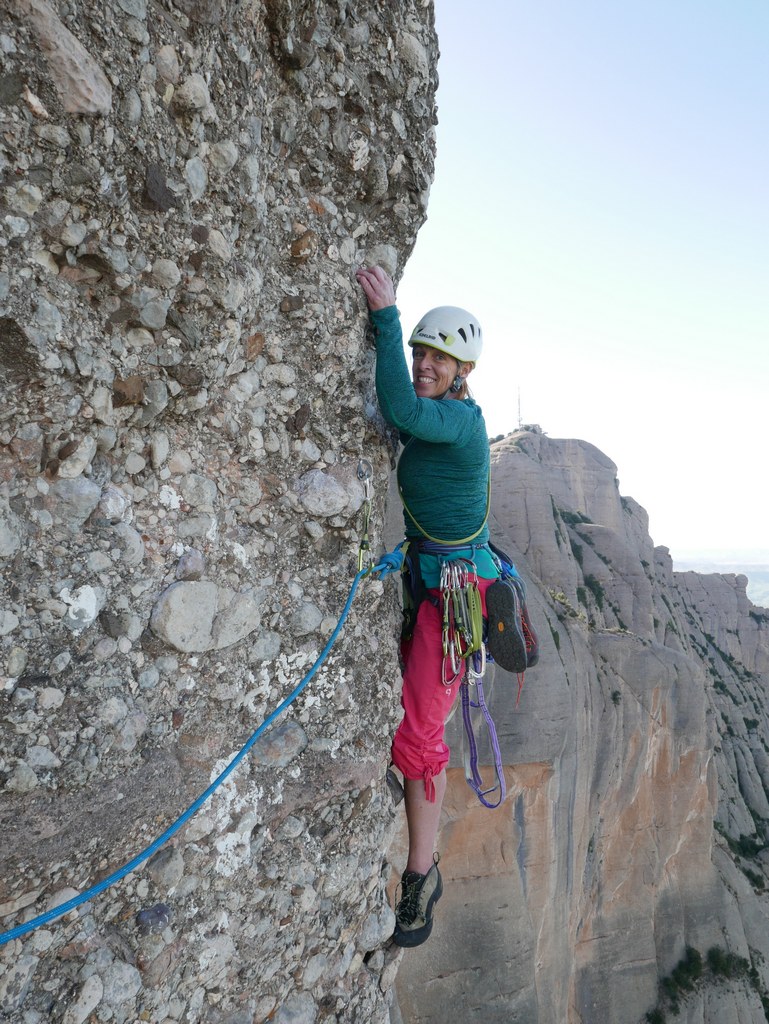 Paula leading off on the very exposed pitch 7. 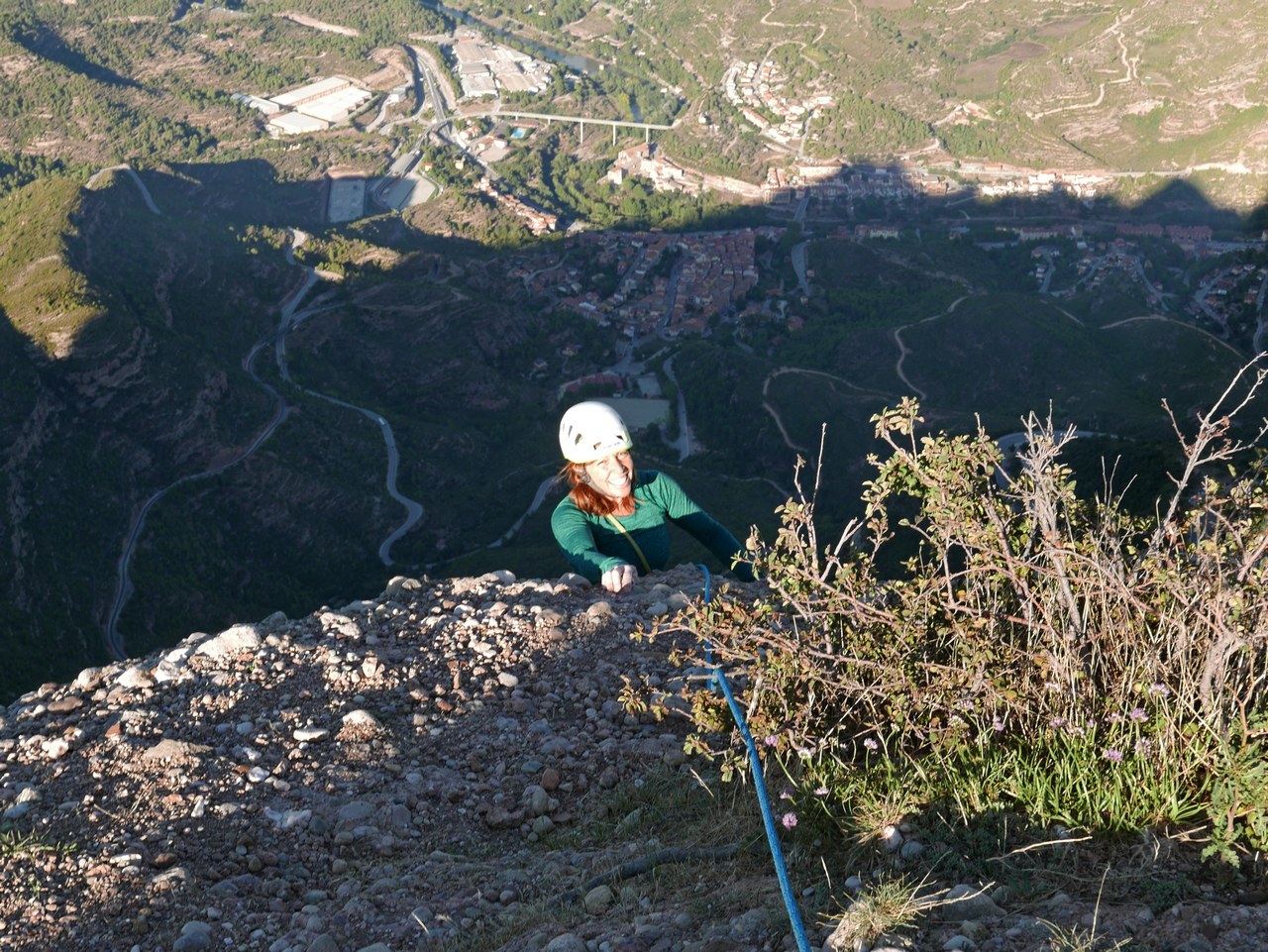 Pulling over the summit. Monistrol in the background.

On top the wind was hammering from the other side. Cavall Bernat has a reputation as being a windy place and it was deserved. We made 4 careful raps, found the fixed ropes and descended back to the base, then down the track to the car, getting there just before it got dark. 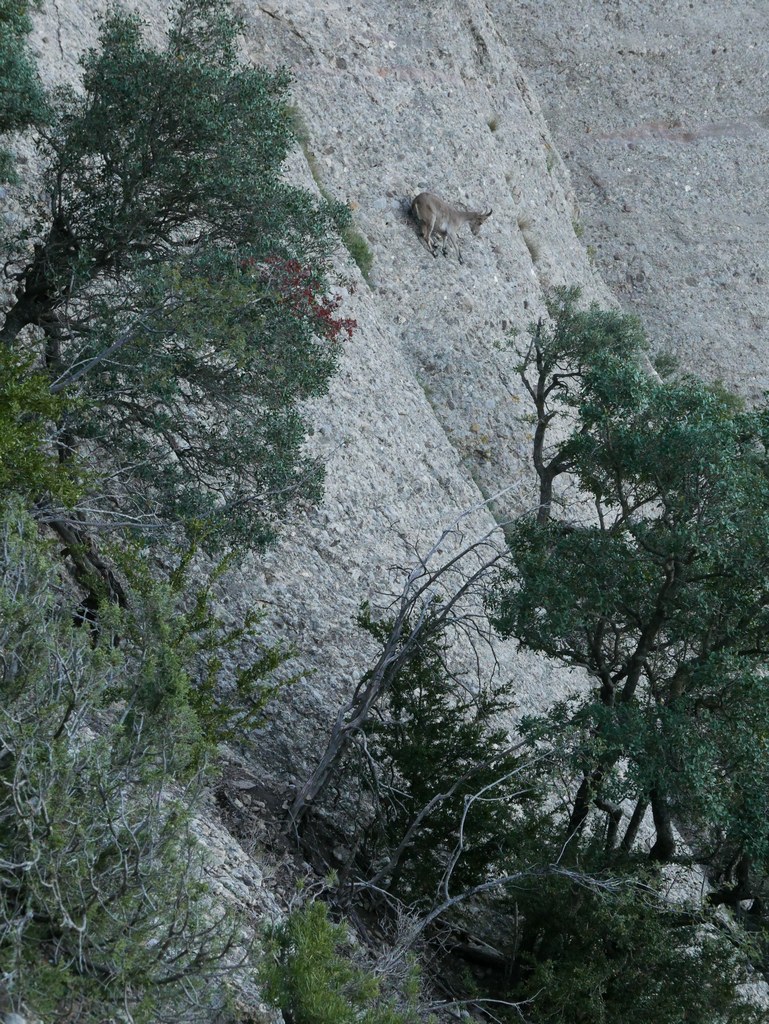 If they ever learn to use cams we're in trouble .. a local Ibex soloing what is probably at least grade 16. 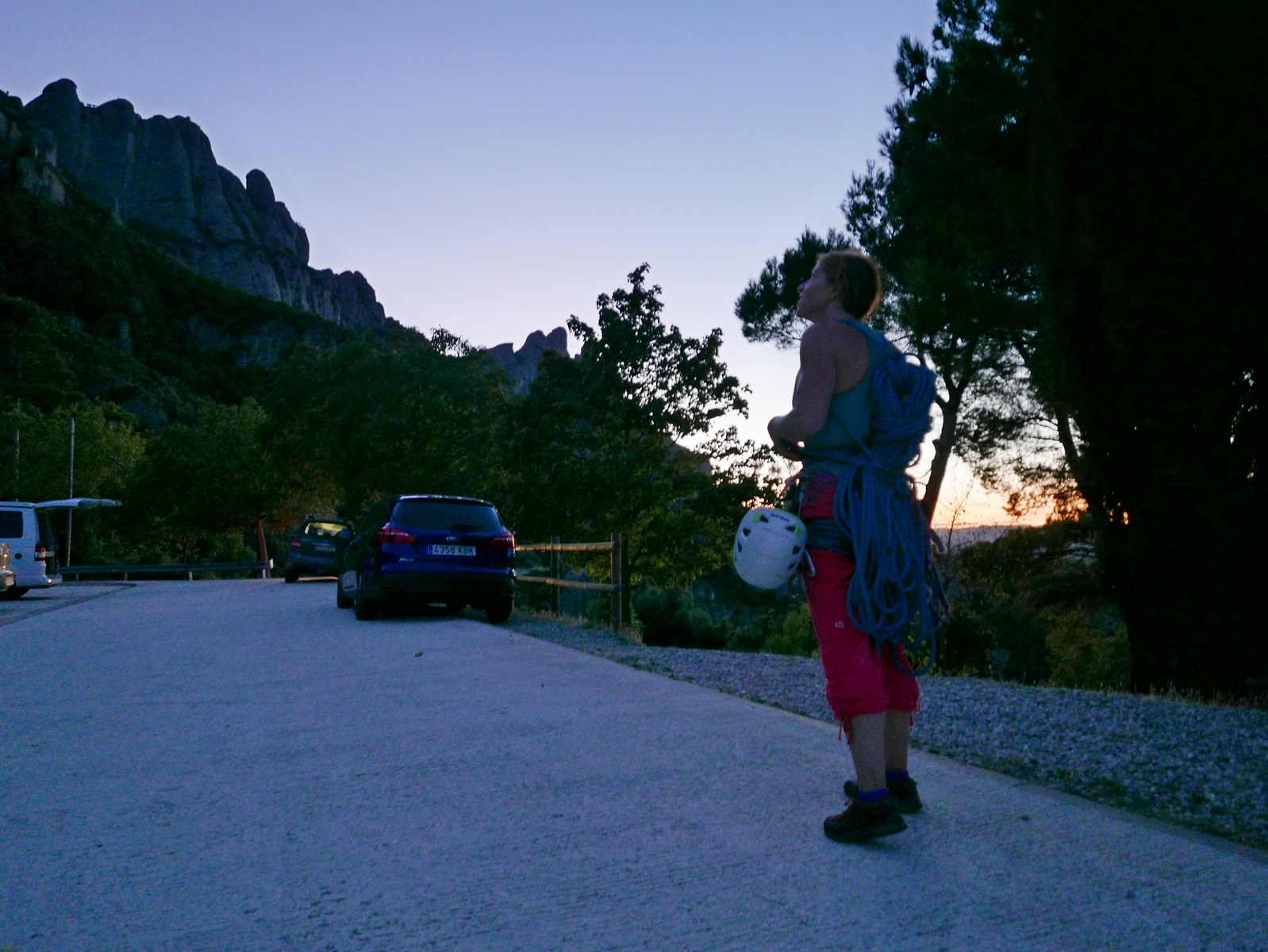 Back at the car.

A terrific day out, highly recommended.